Philip found Nathanael and told him, “We have found the one Moses wrote about in the Law, and about whom the prophets also wrote—Jesus of Nazareth, the son of Joseph.” – John 1:45, NIV

“I’ve found Him!” Philip said triumphantly as soon as he could speak.

“The Messiah! The One we’ve been searching for! He’s from Nazareth!”

Nathanael snorts out this suggestion, “Nothing good comes out of Nazareth.”

“Then come and see for yourself,” Philip urges.

When Jesus saw Nathanael approaching, he said of him, “Here truly is an Israelite in whom there is no deceit.” (John 1:47)

Now, Nathanael is more curious than skeptical. “How did you know who I am?”

Jesus answered, “I saw you while you were still under the fig tree before Philip called you.” (John 1:48)

Just as Jesus saw His disciple under the fig tree, He also sees you. He knows your personality, your past, your hurts, your hunger, and your needs. He knows you completely, inside and out.

Nothing is hidden from Jesus’ perfect vision. Just like He welcomed Nathanael into His circle of disciples, Jesus invites you, too.

God, thank You for seeing me! Please help me grow closer to You during this season. I want to follow in Jesus’ footsteps just like Nathanael did! In Jesus’ name, Amen. 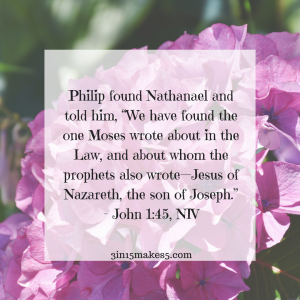