That night Jacob got up and took his two wives, his two female servants and his eleven sons and crossed the ford of the Jabbok. – Genesis 32:22, NIV

Jacob is on a journey to his home country. He’s bringing his wives, children, and all the livestock in his household. But as he’s a way off, the bad news comes: Esau is marching out to meet him with an army.

For those who aren’t familiar with the story, Esau is Jacob’s older twin brother. The two shared a fierce rivalry throughout their childhood. Jacob deceived their father and stole Esau’s birthright and blessing.

So when Jacob learns Esau is coming, he immediately begins making preparations. He sends gifts ahead to greet his brother. He organizes his family into groups, hoping that if Esau attacks one half, hopefully, the remaining half with survive.

It’s late by the time Jacob is done. He goes away into the wilderness to rest.

Jacob wrestled all night with an angel and would not let him leave until he’d received a blessing (Genesis 32:26). In many ways, this story is a picture of what Christians should do.

God doesn’t always give us our request at the moment we ask. Sometimes, He wants us to wrestle for it—to seek Him more, to lean deeper into our prayer lives, and discover more of His rich mercy. The point of doing this is not to weaken our belief but to strengthen our faith.

Lord, give me the strength to persevere in difficult seasons. Like Jacob, I want to cling to You and receive a blessing. In Jesus’ name, Amen. 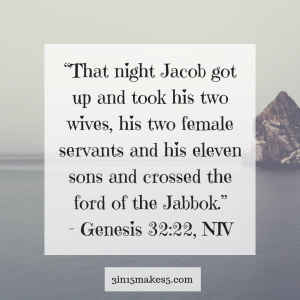