“For we are God’s handiwork, created in Christ Jesus to do good works, which God prepared in advance for us to do.” – Ephesians 2:10, NIV

Holly struggled with an eating disorder when she was a teenager. She’d always felt uncomfortable in her skin and when a boyfriend broke up with her because she was “too chunky,” she started purging after meals.

It wasn’t until her senior year of college when she met a Christian counselor that Holly began to experience healing. Now after years of work, Holly views herself as a precious daughter of God.

Still, when she had kids, she didn’t want them to face the same struggles. So Holly made it a point to talk with all of her kids about their bodies from the time they were young. “I tried to emphasize how beautiful and unique their bodies were,” Holly explains.

But she didn’t stop there. She wrote down encouraging Bible verses like Ephesians 2:10, Psalm 139:14, Romans 12:1, and 1 Corinthians 6:19-20. Then Holly placed them throughout the house, near mirrors, and on appliances.

Holly says, “My prayer is that my kids be so filled up with the truth of who they are in Christ that they don’t fall into the same lies I did.”

God, You made my body and formed me. I am Your work of art, and that makes me beautiful. Help me to accept this truth and live it out. In Jesus’ name, Amen. 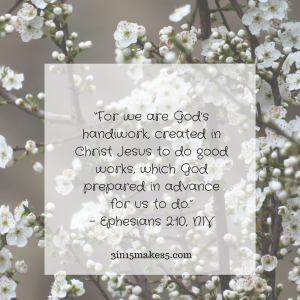