Samuel had been a prophet of God for years. He had faithfully served the nation of Israel for decades. His hair was gray, and his eyes were tired when the people of Israel brought a new request before him.

They wanted a king, just like the surrounding nations had. Samuel is distressed about this and prays to the Lord.

Samuel goes on to warn Israel about what will happen to them when they have a king. They ignore him until he calls down rain and thunder from Heaven.

Finally, they admit their wrong, but they do nothing to fix it. They still pick a king and allow him to reign.

Often, mature spiritual leaders have a deep wisdom that they’re willing to share. Don’t be like the nation of Israel and reject their advice. Instead, pray over it and see if God confirms what they have told you.

God, please surround me with spiritual leaders who are mature. I want to follow Your path, and that means listening to wisdom from those You’ve placed around me. Let my heart be humble and willing to hear. In Jesus’ name, Amen. 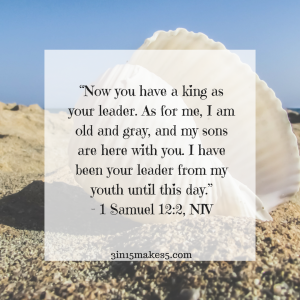