“The teachers of the law and the Pharisees brought in a woman caught in adultery.” – John 8:3, NIV

Since her father had died, caring for her sick mother and younger siblings had fallen to Adina. She couldn’t keep her grades up while working as a waitress. So she dropped out of school and struggled to make ends meet for her family.

Then one day an older woman ordered a latte and stayed around to chat. She was dressed in beautiful clothes and carried herself like she was wealthy.

The older woman told her about a way to earn more money. “It’s like being a girlfriend for an evening,” she explained. “You just go to dinner with wealthy men, and they pay you for your company.”

Young and innocent, Adina didn’t realize the con until it was too late. Now, she was trapped in a life as a teenage prostitute.

When a hotel room door opened, and she was dragged naked into the streets, she closed her eyes. Shame burned in her, coloring her cheeks. She hadn’t meant to find this life.

Thrown into the middle of the town square, she hears a booming voice, “The Law commands we stone her. What do you say?”

Adina opened her eyes, wondering who the judge before her was. She held her breath and waited for his response. Instead, He just wrote on the ground, seeming to ignore the whole scene.

When he was asked again, the man turned and softly said, “Let those without sin cast their stones.”

Adina watched as the crowd around her slowly melted away. But still, she waited. Who is this man who stood up for me? She wondered.

After a moment, He spoke, “Where are your accusers? Have they condemned you?”

“Then neither do I,” the man says. “Go and leave your old life behind.”

God, thank You for Your grace. You have compassion on me always. Help me to extend that same compassion to someone else. In Jesus’ name, Amen. 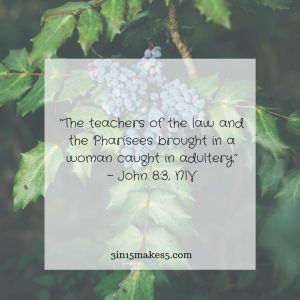