“If we confess our sins, he is faithful and just and will forgive us our sins and purify us from all unrighteousness.” – 1 John 1:9, NIV

Ed was unfaithful to his wife. He cheated on her with a woman at work and decided to move in with her. He asked his wife for a divorce and let her raise their young children alone.

But after a time, Ed came back to his wife. He recognized his destructive choices and cut off his relationship with the other woman. Then after several months, he moved out. Once again, he asked for a divorce.

Three times, Ed did this. But the last time Ed came home, it was for good. He sought counseling from a Godly older man. He joined a men’s group where husbands showed up to work through their marriage problems together.

Slowly, Ed’s marriage began to heal. It took years of work, a lot of prayers, and some serious soul-searching. “I’m so thankful that God restored my marriage. I did everything I could to destroy it, but my wife showed incredible grace despite my unfaithfulness.”

Just as Ed’s wife forgave him, God forgives his beloved children when they sin. He longs to show us grace and restore our fractured hearts.

Lord, I confess. I’ve (name your sin). It’s a sin against You. I’ve been unfaithful, and I admit that. But I want to change. I want to make different choices and walk in a path that honors You. Please help me to do that. In Jesus’ name, Amen. 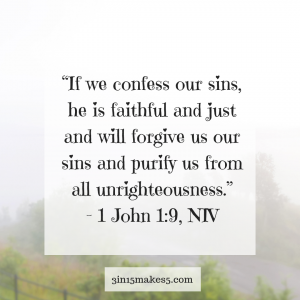