But while Joseph was there in the prison, the Lord was with him; he showed him kindness and granted him favor in the eyes of the prison warden. – Genesis 39:20-21, NIV

Joseph’s story is one of repeated injustice. First, his brothers throw him down into a dark pit. Can you imagine his thoughts as he heard his brothers casually deciding how to kill him? Panic and fear probably ran through him.

When he’s pulled out of the pit, Joseph is taken to a foreign land and forced into slavery. But he works hard in Egypt. His work ethic catches his master’s eye, and it isn’t long before Joseph is second in command.

But unfortunately, his job comes with a complication. His master’s wife now wants him. She purposely arranges time alone with him, without the presence of servants.

When Joseph rejects her, he’s the one accused of wrongdoing! He is sent to prison, serving time for a crime that he never committed.

At this point, no one would fault Joseph if he decided to become bitter. He’s already endured so much injustice. But through it all, Joseph trusts that God is working a plan.

Years later when he meets with his brothers again, he explains:

“You intended to harm me, but God intended it for good to accomplish what is now being done, the saving of many lives.” (Genesis 50:20, NIV)

It’s difficult when we’re faced with injustices. Perhaps a co-worker lied about you. Maybe your spouse is verbally abusive when you’re alone but charming to everyone else. Perhaps you were assaulted, and your rapist was allowed to go free.

Whatever your injustice, you can trust that God is still in control. He is not the author of evil, but He does promise to redeem these terrible moments and use them for your good and His glory.

Lord, I struggle. I want to be bitter and angry. This injustice isn’t fair. It’s like sandpaper against my heart, and I can’t take anymore. Don’t let this consume me. Redeem the evil in my life and set me free from this pain. In Jesus’ name, Amen. 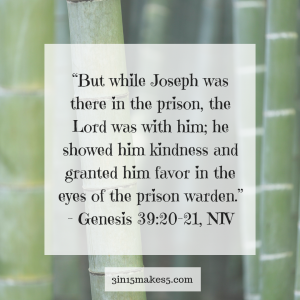