The King of Aram was determined to capture the nation of Israel. He set an ambush and waited for the king’s men. Israel’s troops showed up, but they weren’t surprised by the attack. They’d been prepared for it, and they fought valiantly.

This happened again and again. Finally, the King of Aram demanded to know which one of his troops was a spy for Israel. One of the troop came forward to explain that the prophet, Elisha, was warning Israel about these planned ambushes.

So, the King of Aram decided that he needed to kill Elisha and then his plans to ambush Israel would be successful. When he learned where Elisha was, he gathered his troops and surrounded the area.

The next morning, Elisha’s servant looked out the window. He was shocked to see so many troops. And he was very afraid. Elisha saw his servant’s discouragement and uttered a bold prayer.

And Elisha prayed, “Open his eyes, Lord, so that he may see.” Then the Lord opened the servant’s eyes, and he looked and saw the hills full of horses and chariots of fire all around Elisha. (2 Kings 6:17, NIV)

When you’re facing discouragement, it can be easy to focus on what you see—the hard heart of your spouse, the deaf ears of your child, the cruelty of your boss. But just as there was a Holy army around Elisha, there is one around you, too. You are not walking into the battle alone. You are backed by the “Lord of Heaven’s armies.”

Lord, sometimes, all I can see are obstacles and hardship. Open my eyes. Remind me again that You’re fighting this battle with me. You are present with me even now! In Jesus’ name, Amen. 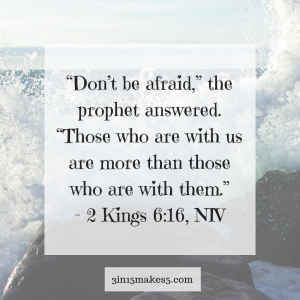