But when the Jewish Festival of Tabernacles was near, Jesus’ brothers said to him, “Leave Galilee and go to Judea, so that your disciples there may see the works you do. No one who wants to become a public figure acts in secret. Since you are doing these things, show yourself to the world.” For even his own brothers did not believe in him. – John 7:3-5, NIV

Tasha had a passion for dance. She’d always longed to study it for herself. After years of dreaming about it, a friend signed her up for dance lessons at a local studio as a surprise birthday gift. Tasha was over the moon. She practically skipped into the first session, pausing to take a quick selfie and share it on Instagram.

She was still feeling the rush from the first lesson when her phone chimed. A series of text messages came from Tasha’s mother, condemning her for taking the lessons. Her mother believed that dancing in any form was sinful.

Tasha was crushed by the lack of support. She instantly began questioning what she’d done. She thought God gave her the gift of dance. Now, someone was telling her that wasn’t so.

If you’ve had experiences like Tasha’s, you’re not alone. Even Jesus had family members who didn’t believe in Him or understand His purpose. But He chose not to focus on that. Instead, He spent His time doing what God had called Him to do.

Lord, please give me the grace to show grace to my family. They don’t understand what You’re calling me to do. It hurts that they don’t believe in me. Turn my eyes from these aches to You. Let me delight in this gift You’ve given me. In Jesus’ name, Amen. 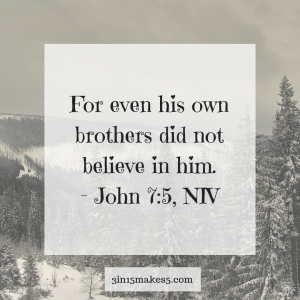