“There was a certain royal official whose son lay sick at Capernaum. When this man heard that Jesus had arrived in Galilee from Judea, he went to him and begged him to come and heal his son, who was close to death.”
—John 4:46-47

When Jesus arrived in Galilee, he met a man who came pleading for his son’s life. The man was a royal official and most likely had plenty of money and servants.

But even wealth and power don’t guarantee that a person will never face hardship or pain. So, an anxious father found himself in a crowd, begging Jesus to return with him.

“Unless you people see signs and wonders,” Jesus told him, “you will never believe.” (John 4:48)

Again, the man begs, asking Jesus to accompany him before his son dies from his illness. Then Jesus tells him to leave, promising that his son will live.

When he returns home, the man finds his son well. So, he calls his servants and asks what time the boy improved. He smiles when they mention the time because it was the exact hour that he was with Jesus.

There may be an illness or relationship in your life in which Jesus has promised healing. As the days pass, you may wonder why you haven’t seen it yet. Though the man had the assurance from Jesus that all would be well, he still had to travel a long distance before he could see it fulfilled.

Sometimes, healing happens long before we see it. Don’t lose faith, dear one. If God has assured you that you will experience healing, it’s a promise that He will keep.

God, thank You for Your faithfulness. I haven’t seen healing (in this area of life) yet, but I know that You are working all things for my good. Let Your name be magnified through this healing work that You’re doing. In Jesus’ name, Amen. 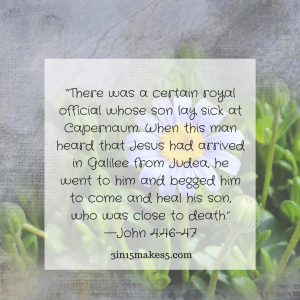