“While he was still speaking, Judas, one of the Twelve, arrived. With him was a large crowd armed with swords and clubs, sent from the chief priests and the elders of the people.” – Matthew 26:47, NIV

Walter was a well-known mechanic in his town. When he started his own auto business, he hired several other people to work with him. One of these people was Todd, a young man that seemed lost and lacking direction.

Over the next two years, Walter mentored Todd. He taught him how to change tires, install radiators, and fix worn out brakes. Walter invited Todd into his home, welcoming him to his dinner table. He even considered the younger man the son he’d never had.

Then came the day Walter discovered his business accounts had been emptied and Todd had left town. Walter was upset about the financial loss but even more than that, he grieved for the close relationship he’d lost.

Betrayal is inevitable. At some point, you will be sold out. It might be a friend who gossiped about your marriage troubles. Maybe the spouse who cheated on you. It could be the co-worker who took your project and didn’t share any credit.

You’re not alone. Jesus knows what that betrayal feels like because He’s stood in your shoes and unlike others, Jesus won’t abandon you in your time of need.

God, I need strength. I’ve been betrayed, and my heart feels bruised and broken. I feel alone and sad. I need You. Please wrap me in Your arms and comfort me. In Jesus’ name, Amen. 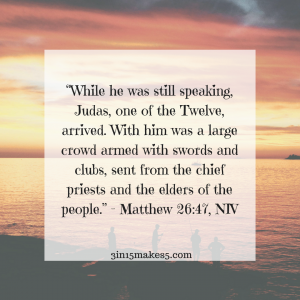