Beth had worked at the same company for decades. She was active in her church and regularly helped people in her community. Everyone who met her knew she was a giver with a soft spot for those who were needy or poor.

One February morning, she received a call from an old family friend who lived hours away. Beth’s mother had gotten confused driving in the snow and run off the road. She’d been alone in her car for several hours before a passing motorist found her and called emergency services.

While her mother would recover, the family friend shared that the doctor suspected the older woman was suffering from dementia. More testing would need to be done, and her mother had asked for her several times.

Beth dropped everything to race to her mother. She told her boss she’d need to use her two weeks of vacation time to sort out the situation.

After it became clear that her mother would need more supervision, Beth decided to move her mother into her home. Beth’s co-workers sprang into action. One drove a moving truck thousands of miles to help with the packing and moving.

Another donated her vacation time so Beth would have more time to get everything done for her mom. Several co-workers went and tended to Beth’s yard. A small group stocked her fridge and pantry with food.

Beth had spent so much time pouring into her community that when others had a chance to meet her needs, they were delighted to help.

God, when I see a need, help me to spring into action. I want to be the hands and feet of Jesus by meeting the needs of those in my community. In Jesus’ name, Amen. 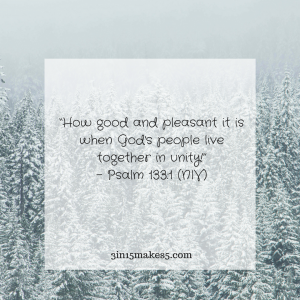