Jesus continued: “There was a man who had two sons. The younger one said to his father, ‘Father, give me my share of the estate.’ So he divided his property between them.” – Luke 15:11-12, NIV

He sat at the worn farmhouse table, tapping his fingers against the solid wood. He’d spent all night, praying desperately for answers.

The farm had been in his family for generations. He was proud of his legacy. He’d always dreamed of passing it onto to his two boys.

His just-graduated-from-high-school son had asked him for his share of the farm. There were still streamers on the wall, cake dishes in the sink, and ink drying on the boy’s diploma.

He could say no. He’d warred with the idea into the wee hours of the morning. But Jason had always had a stubborn streak; the kid who had to learn things for himself before he’d trust anyone else.

When his wife appeared in her fuzzy robe and joined him at the table, he sent her a worried glance, “What should I do?”

She took his hand in hers, running her fingers over callouses. “Let him go. Perhaps the Lord will let him return to us in time.”

So, he did. He signed the check and handed it to his son, biting his tongue. The loss he felt as he watched those tail lights disappear cut deep.

Still, he rose every morning to sit on the porch. He waited what felt like lifetimes until the day he saw his boy on the horizon.

Sometimes, children don’t walk in the wisdom of their father. They make foolish decisions and won’t listen to anyone. But hold onto hope, dear one. Just like the prodigal father’s faith was rewarded may God let yours be too.

God, my heart is broken over the rebellion of {name of loved one}. Please direct my loved one back to the right path. In Jesus’ name, Amen. 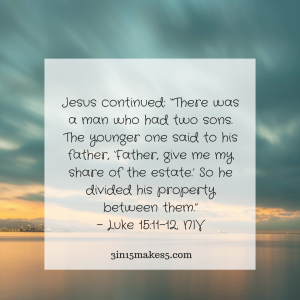