“Make every effort to live in peace with everyone and to be holy; without holiness no one will see the Lord.” – Hebrews 12:14

Isaac had become very rich and very powerful because God had blessed him. He was so blessed that the people around him feared him and asked him to move. So Isaac, seeking to live in peace, moved into the Valley of Gerar (Genesis 26:17).

The valley he went to had once been where his father, Abraham, camped and it contained many wells. The Philistines had filled these wells with dirt, making them unusable.

Isaac instructed his servants to clear out the wells so he could have water for his household. When they cleared the first one, some Philistine men came to Isaac and claimed they were using the well before him.

But Isaac refused to bicker and simply moved to another well. When that was ready to be used by his family, more Philistine men came. They also claimed the well. Again, Isaac surrendered the well.

Once the third well was finished, no one had any quarrels. Although it had been difficult, Isaac’s peaceful responses allowed him to live in harmony with those around him.

Lord, when I’m tempted to bicker, help me remember Isaac. Let me be willing to lose a well rather than a brother. In Jesus’ name, Amen. 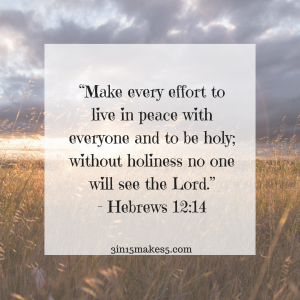