David asked, “Is there anyone still left of the house of Saul to whom
I can show kindness for Jonathan’s sake?” – 2 Samuel 9:1, NIV

When David had finished uniting his kingdom and defending his country, he thought again of his beloved friend, Jonathan. Longing to show kindness in his friend’s memory, he calls for a search to be done. Does Jonathan have any family that he could look after?

After interviewing a few people, David discovers that Jonathan does still have some family left, a son by the name of Mephibosheth who was crippled in a fall when he was just a small child.

So, David orders for Mephibosheth to be brought to him. Typically, new kings would completely destroy the family of the previous king.

These executions would be carried out so that no one from the family would come to assassinate the newest king. That means that when David called for Mephibosheth, the crippled man was probably anxious.

He expected a sword to greet him and instead, he was given a position of favor within the kingdom. In many ways, this is a story of what happens to Christians. Jesus rescues and restores us to a right relationship with him, allowing us to dine at the table He’s preparing for us in Heaven.

God, You have invited this beggar to eat at Your table and shown me kindness I don’t deserve. Thank You for Your amazing love. In Jesus’ name, Amen. 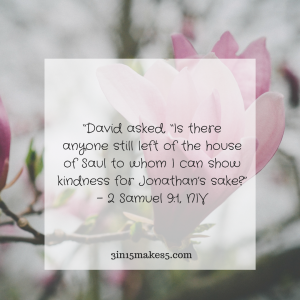