“Not long after that, the younger son got together all he had, set off for a distant country
and there squandered his wealth in wild living.” – Luke 15:13, NIV

Jordyn was the daughter of a wealthy businessman. One day, she approached her father and demanded her portion of her inheritance. She wanted to live it up while she was still young she told him.

Though her father’s heart was saddened by his daughter’s decision, he still gave her the value of her inheritance. He texted her each day she was gone, hoping for a reply. He followed some of her antics in gossip magazines, watching as she seemed to morph into a different person.

One morning when he texted Jordyn, he was surprised to receive a reply. It was short and got his attention instantly: I messed up, Daddy. I know that now. Can I come home?

With shaky hands, her father texted her back: Yes.

When Jordyn told the taxi cab driver to turn down her street, she couldn’t believe what she saw. There, on the front lawn was the biggest party she’d ever seen. As she stepped out of the cab, her father rushed to embrace her.

Jordyn sniffed and stepped back, “Who are you throwing a party for?”

Her father gave her a watery smile, “It’s for you, baby girl. Welcome home!”

It can be tempting to believe that you’ve gone too far to be redeemed. But you don’t have to hide out. Your Heavenly Father is waiting to welcome you home, beloved!

God, thank You for Your grace! When others discover Your love, let me be the first to join the welcoming committee! In Jesus’ name, Amen. 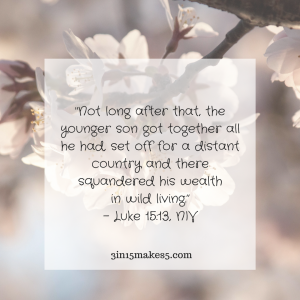