The Lord said to her, “Two nations are in your womb, and two peoples from within you will be separated; one people will be stronger than the other, and the older will serve the younger.” – Genesis 25:23, NIV

Jacob and Esau were twins. Jacob, the younger brother, stole Esau’s birthright. Worried his brother might kill him, Jacob fled to a distant land.

The two brothers reconnected many years later. Esau forgave his brother and the two patched things up. But that didn’t mean they were free from problems forever.

Unfortunately, this was the beginning of a bitter dispute that frequently results in battles and war. A lot of lives were lost because one nation would not show grace to another.

Sometimes, family relationships are hard, and it’s important to watch out for those roots of bitterness. They can quickly become harsh words and ugly feuds that leave both of you with deep scars. Challenge yourself to take the high road. Ask God to show you how to extend grace in these moments.

Lord, please help me in my relationship with (name). You know the struggles we face. You know how I want to “get even” sometimes. Give me the strength to rise above my pettiness. Grant me supernatural grace because I can’t do this on my own. In Jesus’ name, Amen. 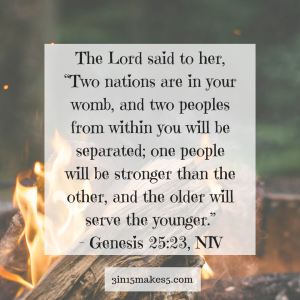