“For I know the plans I have for you,” declares the Lord, “plans to prosper you and not to harm you, plans to give you hope and a future.” – Jeremiah 29:11, NIV

Amy graduated from college with high hopes. After spending the last four years studying for a Bachelor of Science in Nursing, she was excited. She knew God had called her to be a nurse and she was looking forward to serving others.

But six months passed after graduation, and she still had no job offers. She made some tips from her job as a waitress, but it wasn’t enough. So, Amy found herself returning to live with her parents.

She went on interviews and regularly searched online for opportunities. But every time, she was met with a roadblock. Usually, it was an interviewer who’d already filled the position and didn’t need another nurse.

Finally, it looked like things were changing. She was offered a job at a doctor’s office. She’d get full benefits, and there was plenty of room for advancement if she chose to pursue more schooling.

But at the last minute, the job fell through. Amy was crushed, and when her father came home from work, he found her crying on the couch. “Daddy, I don’t understand. I keep trying to find work. I know I’m in the field that I’m called to be. So, why won’t God open the door for me?”

Her father listened to her cries and wrapped his arms around her. He quietly said, “I know you’re confused right now. But God has a plan for you. Keep holding on.”

Two weeks later, Amy received a job offer from a hospital two hours away. She moved into an apartment. Her job was trying at times, but she loved knowing that she made her patients’ lives better.

While she was working at the hospital, Amy even met the man that became her husband. Standing in the dressing room before her wedding, she laughed with her father. “If God had given me a different job, I never would have met Michael. That was His plan, but I couldn’t see it!”

God, help me to trust You when I don’t understand. I know that You are working everything out for Your glory and my good. Thank You for that! In Jesus’ name, Amen. 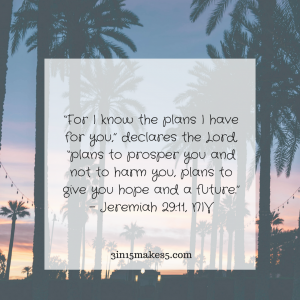