“He did not let anyone follow him except Peter, James and John the brother of James.”
—Mark 5:37

Jairus is the father who came to Jesus to seek healing for his daughter. While they were traveling to his home, the word came that his daughter died. Jesus instructed Jairus to “just believe” (Mark 5:36)

When they arrive at the house, there’s a crowd of relatives that are mourning the girl. Jesus explains that the girl is not dead, merely sleeping. Everyone laughs at Him, and He orders them out.

But what’s interesting is that everyone is dismissed except for Peter, James, and John. These three are allowed to stay while the others are sent away. Why did Jesus handpick just a few disciples?

Perhaps the most obvious answer is that He wanted witnesses to this miracle. Witnesses who would boldly proclaim what they saw to others.

Consider this: Mark and Luke both recount the story of Jairus. How would they have known of these events unless the three witnesses spoke of them?

Sometimes, God calls you into a situation to be a witness to a miracle that He’s about to perform. Perhaps God called you to minister to someone who’s marriage will be restored by His power. Maybe He asked you to reach out to someone who struggles with addiction and will be healed by His grace.

God, let me be a faithful witness. Let me boldly proclaim the miracles I’ve seen You do in my life and the lives of those around me. In Jesus’ name, Amen. 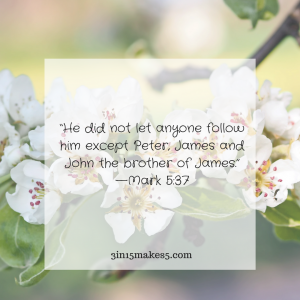