As he approached the town gate, a dead person was being carried out—the only son of his mother, and she was a widow. And a large crowd from the town was with her.”
—Luke 7:12

When Jesus was in Nain with His disciples, He saw a funeral procession. A young man who died was being taken to his tomb. His mother followed after her child, weeping as she went.

She’d already lost her husband, and now her grief was doubled. Perhaps that’s why Jesus had such compassion for her. Seeing her tears, he tells her not to weep.

Instantly, the young man sits up and begins talking. Then Jesus helps him to his mother and smiles as He unites the two.

Perhaps you have a loved one you consider lost, beyond any hope. It could be your brother who struggles with drug addiction or your daughter who has chosen a destructive path.

Know that Jesus sees your pain, just as He saw the widow’s. But He is not a passive witness. Our pain often prompts God to move in a situation and redeem it for His glory.

God, please help me. I feel like I’ve lost (loved one’s name) to (their struggle). But I know You can rescue and restore their souls. Please intervene in this situation and redeem it for Your honor. In Jesus’ name, Amen. 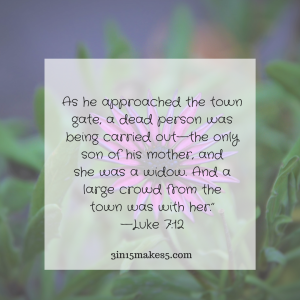