“May the Lord make your love increase and overflow for each other and for everyone else,
just as ours does for you.” – 1 Thessalonians 3:12 (NIV)

When his father became ill and needed care, Larry moved from Chicago to North Carolina to care for him. The two of them moved into an apartment building in downtown Asheville.

Larry didn’t mind the move. He’d already considered changing his profession, and the move gave him the opportunity to re-invent himself professionally.

But he did miss his once active social life. He wanted to find a way to connect with his neighbors and build a community around himself and his father, who had once been a social butterfly.

A couple of days after his move, Larry saw a young couple moving into the building. He helped them carry in some of their heavy furniture. Then they asked to borrow a few tools from Larry, explaining that they’d had some items stolen during their move.

Larry loaned the tools and also came up with an idea for meeting his neighbors. He got permission from the building manager and put up a flyer. He started a tool library, encouraging his neighbors to come and borrow from him if they had a need.

Within a few weeks, Larry had met many of his neighbors. Some wanted to take him up on his offer, and others found his flyer made him seem approachable. His dad even struck up a few conversations and invited the roommates across the hall over for dinner.

Starting a lending library is a great way to meet your neighbors and others in your community. You can start a library of tools, a library of recipes, a library of children’s toys, or any other type of library you can imagine. The possibilities are endless!

God, let me be generous with my things. I don’t want to hoard the blessings You’ve poured out on me—I want to share them with others, too! Help me have a giving attitude and a willing heart. In Jesus’ name, Amen. 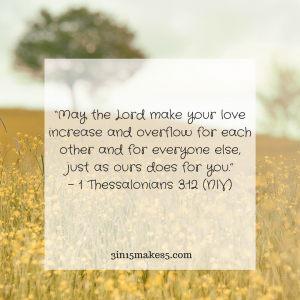