If an enemy were insulting me, I could endure it; if a foe were rising against me, I could hide. But it is you, a man like myself, my companion, my close friend, with whom I once enjoyed sweet fellowship at the house of God… – Psalm 55:12-14, NIV

Harry was just a toddler when his father died. His mother never remarried or even dated again. Growing up, Harry struggled without a role model. He needed someone to look up to, someone who could show him how to be a man.

After high school, Harry started working as an intern for a media company. While he was there, he made fast friends with Luke. The older man took him under his wing, treating him like a son.

Harry soaked up the positive attention and the two bonded over their shared love for fishing and fixing old cars. When a scholarship at the company was announced, Luke recommended Harry for the spot.

Not long after Harry returned from college, he was quickly promoted to a management position. But he also noticed a change in Luke. Luke’s attitude had cooled toward him, and Harry was lost. He didn’t know what he’d done or said. He asked, but Luke dodged the question.

A few weeks later, Harry learned that Luke was undermining him. The older man had been passed over for a promotion, and instead, the position was given to Harry.

When a friend betrays you, it can be painful. But you’re not alone. Jesus knows how you’re feeling and what you’re going through. On the Cross, Jesus felt alone in His anguish. He’d been betrayed by everyone, but He chose to focus on forgiveness.

Lord, I’ve been betrayed. This cuts deep, and I want to lash out. Give me the strength and grace to forgive. I want to model Your love and compassion. Show me how to do this. In Jesus’ name, Amen. 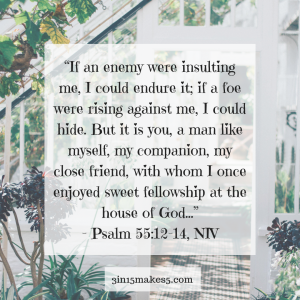