“How good and pleasant it is when God’s people live together in unity!” – Psalm 133:1, NIV

Andrew was a pastor in Texas. During a hurricane, the church building was destroyed. A local middle school and a local business owner both loaned out the use of their buildings for the services.

When a new church building was finally completed, Andrew was nervous about mixing the two congregations again. It had taken well over a year to complete the project, and he’d often felt like he was leading two churches.

But he decided to create a #selfie Sunday event on the first week back in the building. He knew the idea would be popular with the younger crowd, but he worried about the older one. Would they refuse to take part? Would they even be willing to mix social media inside the church?

To his surprise (and delight), Andrew found both sides of the congregation responsive to the idea. Many of the young people in the church took the time to show the older members how to take selfies and share them online.

Sometimes, it can be tempting to dismiss an idea as too radical or too new to resonate with your audience. But your community can embrace new things if you go first and demonstrate what to do.

Lord, help me to bring unity to my community. Show me how to minister to my followers so they can hear from You. In Jesus’ name, Amen. 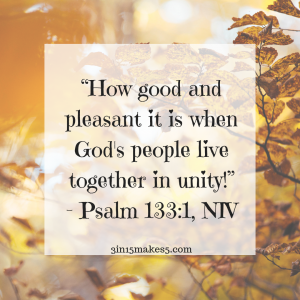