“Then Jesus told them this parable: “Suppose one of you has a hundred sheep and loses one of them. Doesn’t he leave the ninety-nine in the open country and go after the lost sheep until he finds it? And when he finds it, he joyfully puts it on his shoulders…” – Luke 15:3-5, NIV

It was supposed to be a quick stop at the department store. But with two toddlers underfoot, Mark’s shopping trip was quickly extended. His daughter wanted to see the baby dolls. His son wanted to play with the racecars.

He had just finished paying the cashier and gathering the last of the groceries. He turned to find his daughter alone. Glancing around, he said, “Lizzy, where is your brother? Where did he go?”

Without a second thought, Mark abandoned the cart of groceries he’d just paid for. He scooped up his daughter and began searching the register area frantically. He paused only long enough to ask each cashier if she’d seen a little boy pass her way.

Mark moved to the toy section, checking each aisle carefully. Maybe his son had come back to look at the red car that he asked for every time they came to the store.

Security arrived, peppering him with questions. A missing child announcement boomed over the speakers as he struggled to describe what his boy was wearing. How could this have happened? I looked away for thirty seconds!

After a few minutes and what felt like a lifetime, one of the security guard’s radios crackled to life. His son had been found, napping safely on a pile of women’s t-shirts.

The moment Mark saw his child again, he crushed him in a bear hug. When Mark shared the story with his friend, he said, “I never understood the urgency behind the parable of the lost sheep until I thought I lost my son. Then it took on a whole new meaning.”

Thank You, God, for always seeking the lost sheep. No matter how far I stray, You never take Your eyes off me. I praise You for that today! In Jesus’ name, Amen. 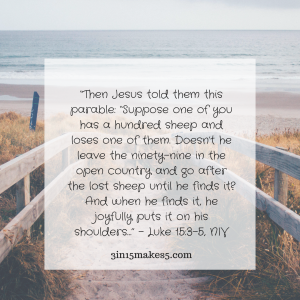