Meanwhile, the older son was in the field. When he came near the house, he heard music and dancing. – Luke 15:25, NIV

Day after day, Mark watched as his brother, Greg, frittered his time away at the company. He was always chasing random projects and not contributing to the overall business.

Finally, Greg came to their father, wanting his share of the company. When his father granted it to him, he promptly sold the stock options and went off on another one of his many adventures.

Envy ate at Mark in the months that passed. Here he was doing the right thing, standing by their father, and as usual, Greg was nowhere to be seen.

Then one day, Greg returned. He sobbed into their father’s shoulder, recounting his misdeeds and begging for forgiveness.

Mark watched. He waited months for this moment—the one when his father would tell his lazy, no-good brother that he’d gone too far. Maybe he’d tell him he wasn’t welcome at the family dinners. Heck, maybe he’d disown him entirely.

But amazingly, his father ignored Greg’s sobs. Instead, he demanded a company-wide party for Greg.

Mark saw red. “What about me?” he exploded. “I’ve been here faithful the entire time. Why are you lavishing grace on him? He doesn’t deserve it!”

Mark’s reaction might seem extreme, but it’s a common one among some Christians. They’re so careful to measure out their good deeds that they miss God’s desire to lavishly pour out His love!

Lord, help me when I’m tempted to judge others. Remind me that we’re all here by Your grace. Show me how to embrace the prodigals in my life and church. In Jesus’ name, Amen. 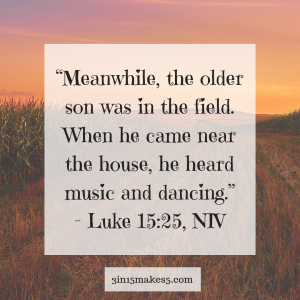