“You will become pregnant and have a son whose head is never to be touched by a razor because the boy is to be a Nazirite, dedicated to God from the womb. He will take the lead in delivering Israel from the hands of the Philistines.” – Judges 13:5, NIV

Jamie was pregnant with her first child. While she was excited about the birth, she was also scared. When Liz, an older woman from her church reached out to her, Jamie shared her fears.

“My mother was addicted to drugs and my father was in and out of prison for most of my childhood. I’m afraid that what happened in one generation will keep repeating in the next. How can I raise a child when I’ve never had a good example of how to do it?”

Liz shared the story of Samson’s mother. “An angel visited Manoah’s wife and told her she would become pregnant with a son who would later be called Samson.”

“When her husband, Manoah wanted to know how to raise the boy, the angel came to the couple and shared God’s instructions again. God will give you wisdom and reveal how to parent your child if you only ask.”

Then Liz encouraged Jamie to pray about it and allow God to guide her. Just because Jamie had a bad childhood did not mean that her child would have one too.

God, let me remember that the sins, mistakes, and problems with the previous generation don’t have to be my child’s story. Show me how to be a wise and loving parent, just like You are. In Jesus’ name, Amen. 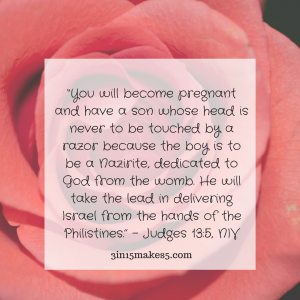