“The Lord is a refuge for the oppressed, a stronghold in times of trouble. Those who know your name trust in you, for you, Lord, have never forsaken those who seek you.” – Psalm 9:9-10, NIV

Kevin grew up with his parents and sisters in a quiet neighborhood outside of Chicago. His father never showed up for his baseball games, never asked about his grades, or encouraged him to apply to college.

But Kevin’s mom was different. She was always there for her kids. She never missed a game, read all of his homework, and continually told Kevin how much she believed in him.

When Kevin ran into a problem or needed advice, he went to his mom. Whether big or small, he knew he could ask her for anything and she’d do her best to help him.

Although he didn’t realize it, his father’s lack of affection impacted Kevin’s faith, particularly his view of God. When his college girlfriend became pregnant, Kevin thought about his relationship with his dad. He was afraid to go to God.

“I was raised in a religious church, where I was told to save myself for my future wife. When my girlfriend became pregnant, I realized I’d made a mess of things. But I thought I couldn’t go to God. I thought He wanted me to figure out everything on my own, like my dad.”

As he was wrestling with what to do, Kevin’s boss was reassigned. A new boss, a middle-aged man, took the job and the two quickly bonded. Slowly, his boss poured into his life, showing him how to support his girlfriend and teaching him how to be a dad.

“Scott made me realize that God wasn’t angry with me. He was willing to guide me and mentor me. Because of him, I’m a better dad and better husband to my wife.”

God, when I’m tempted to believe that I’ve fallen too far, remind me that You’re near. You care about my problems and You long to help me. In Jesus’ name, Amen. 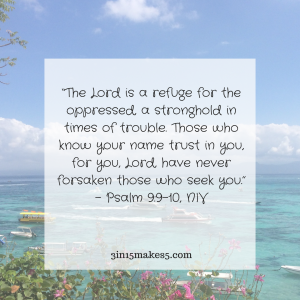