Then he fell on his knees and cried out, “Lord, do not hold this sin against them.”
When he had said this, he fell asleep. – Acts 7:60, NIV

Stephen was a Christian living shortly after the ascension of Jesus. Though little is known of his life, he first appears in Acts 6. At the time, some of the widows within the church were being neglected.

The Apostles recommended that seven trustworthy men be chosen to distribute goods to the widows and care for them. Stephen was one of the seven chosen, and the writer of Acts notes that he was “a man full of faith and the Holy Spirit” (Acts 6:5).

Stephen performed several signs and wonders among the people, most likely because of his close relationship with the Lord. Although others tried to debate his theology, Stephen was known for his wisdom.

Because he carried so much wisdom, some members of the early church were unhappy with Stephen. They put him on trial, bringing his case before the Sanhedrin.

Stephen eloquently defended his beliefs, but he was dragged outside. As his accusers began to throw rocks at him, Stephen looked to Heaven and called out for Jesus to receive his spirit.

Then he made a humble plea, “Lord, do not hold this sin against them.”

At that moment, most people would be tempted to make a different request. Perhaps, “Lord, avenge me” or “Lord, deliver me.” But Stephen, knowing the full power of God, did not ask for vengeance or deliverance.

Instead, he accepted his death and his final thought was not of himself but of those who were hurting him. What a beautiful testimony to his faith.

Jesus, when others are hurting me, help me not to focus on how I can get even. I long for others to come to know You, no matter what the cost is to me personally. In Jesus’ name, Amen. 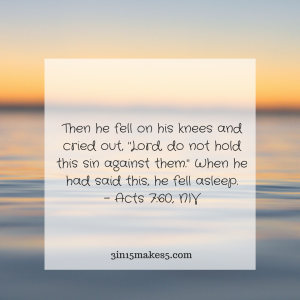