Every day, Josh got up in the morning and carried his cup of coffee to the porch. He’d stir in creamer absently as he prayed. Always the same prayer on his lips. “Send my son home to me.”

He’d stare at the horizon patiently as if he expected the young man to appear at any moment. Season after season he did this. Rain, shine, or snow, he was there faithfully each morning.

Then came the day he spotted a figure in the distance. Could it be…? He held his breath and waited. As the figure neared, he dropped his cup, unaware of the hot coffee puddling around his feet.

He raced out the door and began running. His reunion with his son is sweet and tear-filled. Just as in the Bible story of the prodigal son, Josh’s son was home.

“But while he was still a long way off, his father saw him and was filled with compassion for him; he ran to his son, threw his arms around him and kissed him.” – Luke 15:20, NIV

Just as in the Bible story of the prodigal son, Josh’s son was home.

If you’ve been away from God for a season (or a lot of seasons), know that He will welcome you back with open arms.

Lord, thank You for the grace You extend to me. I don’t deserve, but I’m oh so grateful. Wrap me in Your arms of mercy today. In Jesus’ name, Amen. 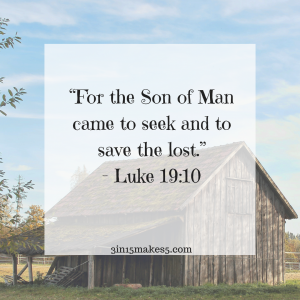