Teri was twenty-five when she adopted a Chinese baby that she named Lily. When she brought Lily to see her grandparents, she was worried they would reject the tiny girl since she wasn’t a blood relative. “Older generations don’t always view things the same way. I wanted my grandparents to love their great-granddaughter as I love her.”

When Teri visited, her grandmother quickly scooped up the tiny infant. She brushed the hair off her forehead and said, “Yep, she has the Wiggins’ family forehead.”

Teri smiled when she realized her grandparents accepted Lily. “From that day forward, Lily was a part of the family. No one treated her differently just because I didn’t give birth to her.”

When someone becomes a Christian, they join the spiritual family of Christ (called the church). Even though you were adopted, there are some traits you may share with your Christian family. Perhaps there’s a Christian at work who has your sense of humor or you go to school with a Christian student who reads the same books you do.

But whatever traits you get from your Christian family, the goal for all of us is the same – to reflect the character of our Heavenly Father.

Lord, please reveal to me what traits of Yours that You gave me. Let me understand how You created me and showed me how to accept other Christians who don’t look or sound like me. In Jesus’ name, Amen. 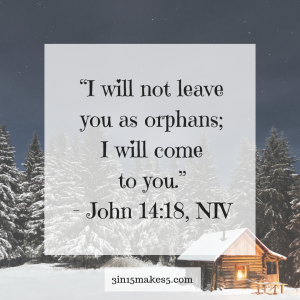