A man in the crowd answered, “Teacher, I brought you my son, who is possessed by a spirit that has robbed him of speech.” – Mark 9:17, NIV

He walked for two days. His back was achy and sore. His mouth was so dry all he could taste was the sand that coated the ground.

But still, he’d come. He’d traveled all this way prompted by one question, “What if…?”

He’d heard the Messiah’s claims. Some said Jesus had brought a dead man back to life. Others recounted tales of healing for their children.

It was this thought that had brought him all this way. He looked down now at the sleeping boy cuddled in his arms. So rarely was his son at peace that this was a special moment.

He hated to wake him, but he was eager to see if the Messiah could heal him. He took the boy to the Messiah’s disciples and waited patiently. But as the minutes stretched out, he found the sour taste of disappointment on his tongue.

Another failed effort. Could no one heal his child?

Just as the thought passed through his mind, the Messiah appeared. “What’s going on here?” he asked in a quiet tenor.

There was something in his eyes, a compassion that made the father speak. He poured out the whole story to Jesus, then added humbly at the end, “But if you can do anything, take pity on us and help us.” (Mark 9:22)

In the barren land, the father drops to his knees. He feels more desperation than faith at this point. “I do believe; help me overcome my unbelief!” (Mark 9:24)

Jesus heals the boy then, casting out the demon. The boy returns to his father’s arms, and the two happily begin their journey home.

God, show me how to trust You in the hard moments. Let my faith be louder than my doubts. In Jesus’ name, Amen. 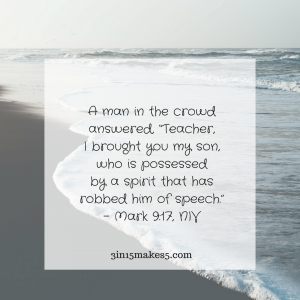