Chad had always defined his son as “one of the good ones.” He’d raised him in a godly home and surrounded him with righteous teachings. His son had been on mission trips, excelled in school, and was quick to help others.

After that was his son’s failed drug test.

The next few weeks passed in a blur. All Chad could think to pray were questions…How did this happen? Where did I fail my son? Were all my prayers for him in vain?

In the middle of his pain, Chad found other parents who were dealing with prodigals of their own. He started a meeting group. Together, parents could pray for their wayward children, share encouragement, and grieve.

Months turned into years. Chad watched as other families were restored to wholeness. Each time, he rejoiced for the lost sheep while his heart cried out for his own son.

Ten years after the first arrest, Chad opened his door to discover his son on the porch. His son looked tired and worn, one step away from hopelessness. “Dad, I want to get better. I don’t want to keep doing this. I know I’ve got no right to ask, but would you help me?”

Although his son had made a mess of his life, that didn’t stop Chad from loving him. He welcomed him home and quickly arranged for his son to join a rehab program for young men.

If you have made poor choices, don’t be discouraged. Just as Chad’s father had compassion, your Heavenly Father has compassion on you. He’s been waiting for you to come home to Him!

God, thank you for Your compassion. Thank You for never giving up on me, no matter what I’ve done or how far I’ve gone. I love you, Father. In Jesus’ name, Amen. 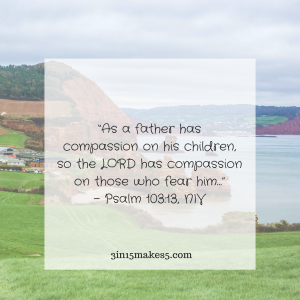