But Moses said to the Lord, “Since I speak with faltering lips, why would Pharaoh listen to me?” – Exodus 6:30, NIV

The Egyptians had enslaved the nation of Israel for centuries. When God was ready to set his people free and lead them to the Promised Land, he called Moses. He told Moses that he was to go to Pharaoh and tell him to set the people free.

But Moses balked. Despite being raised in the palace, he didn’t feel like he could speak eloquently. He used the term “faltering lips” to describe his difficulty with words. Some scholars believe this may have been a reference to some type of speech disorder.

God then says that Moses’s brother, Aaron will go with him and speak in his place. Moses would still lead the nation of Israel. But his brother would be his mouth, sharing God’s words with the people.

But it wasn’t just Aaron that played a pivotal role in Moses’s life – so did his sister, Miriam. She watched over him when he was just an infant. She stayed hidden among the reeds, silently guarding the helpless baby.

Siblings can be a source of protection and support when you encounter difficult circumstances. Don’t be afraid to share with them what you’re going through. Lean on each other and watch as God strengthens your bonds.

Lord, thank You for the gift of siblings! Thank you for (siblings; names). Show me how I can support and protect them during difficult times. Help me to be humble enough to lean into them when I need grace. In Jesus’ name, Amen. 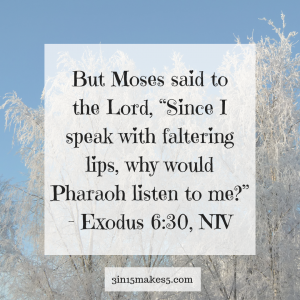