“But the land could not support them while they stayed together, for their possessions were so great that they were not able to stay together.” – Genesis 13:6, NIV

God told Abraham to move to another country. But Abraham didn’t make this journey alone. His nephew, Lot, also came with him.

Both men had so much abundance that there simply wasn’t enough space for the two households in the new country. Eventually, fights began breaking out between Abraham’s and Lot’s servants.

So, Abraham went to Lot to discuss the matter. He explained that he didn’t want the disagreements to sour their relationship, so they should spread out from one another.

So, Lot turned and chose the “best land” for himself. Abraham could have argued for the better land. He was older and more experienced. No doubt he’d mentored Lot over the years and taught him to be successful.

But Abraham didn’t start a petition or hire a lawyer. Instead, he chose to value his relationship with his nephew and in doing this, he extended grace.

Lord, help me to value my relationships. Give me a heart that’s willing to extend grace, even when I don’t get what I want. In Jesus’ name, Amen. 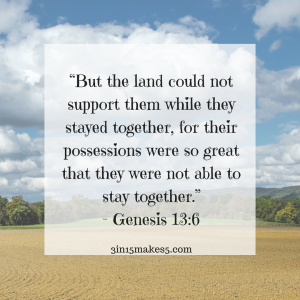