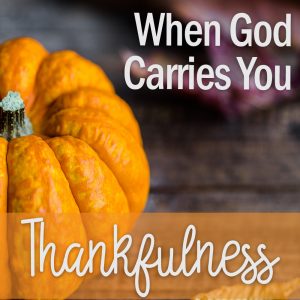 Dwayne was walking through his neighborhood with his three-year-old daughter. She toddled in front of him, taking in all the sights and sounds of their street. She was fascinated by everything around her.

But after walking for a few minutes, she became tired. Dwayne quickly scooped his daughter into his arms and gently placed her on his shoulders.

At first, she was afraid to move and clung tightly to his face and neck. But Dwayne stood still and patiently waited. When she finally realized she was safe, the tiny toddler relaxed, and he began walking back to the house.

Suddenly the little girl shifted and spread her arms out like she was soaring. She started to giggle at the freedom as she enjoyed the new view. Dwayne couldn’t help but smile at his daughter’s happiness, delighting in her laughter.

Much like Dwayne, God carries you each day in His arms. He longs for you to know His embrace and rest in it. That doesn’t mean there won’t be problems or obstacles in your day. But it does mean that He’s with you, holding onto you where you go.

God, help me to feel your embrace today. Like Dwayne’s daughter, I want to enjoy the journey and rest in your arms, knowing I’m held securely.