Michael’s youngest son, Aiden, was in the room when his older brothers decided to watch a movie. The boys didn’t realize the toddler was playing behind the couch, so they didn’t worry when they started the zombie movie. But what Aiden saw scared him, and for the next two weeks, he would wake up with nightmares.

Each time, Michael rose to comfort his son. He tried to make the boy’s room seem less scary by adding a night light, checking for monsters under the bed, and playing soothing music.

One night when Michael was feeling exhausted, the fourth verse in Psalm 121 popped into his head. He’d memorized it as a young boy, and he recited it softly, “Indeed, he who watches over Israel will neither slumber nor sleep.”

“God is watching over you, Aiden,” he said to his son. “And He never sleeps or closes His eyes. He always sees you. No matter where you are or what you’re doing.”

Lord, it feels like there are monsters waiting for me in bed – monsters of debt, worry, heartache, and stress. Please help me rest in peace tonight. Let me remember that You are watching over me. In Jesus’ name, Amen. 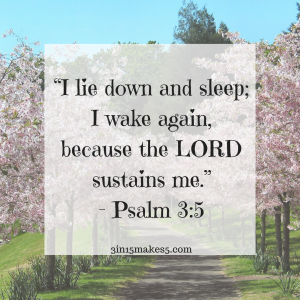