David was staying at a local homeless shelter with his two daughters. Just weeks before, his wife had been killed in a car accident and the factory where he’d worked had shut their doors.

Now, he perched at a table in the middle of a fast food restaurant. He’d brought his toddlers to play in the kid’s zone so he could access the internet for free and look up jobs in his area.

When he was ready to go, he bundled his daughters up. His oldest begged for a kid’s meal. “Not today, sweetie,” he whispered, feeling like a huge failure. He could barely afford the can of vegetables his kids would have for dinner.

A middle-aged man standing nearby overheard their conversation. He approached David and asked if he could buy their little family lunch.

After they ordered, the man explained that he’d been in a similar situation once. “It took me a long time, but I finally got back on my feet. My kids are doing well, and they’re all in college now. You’ll get there, too. Keep hanging on.”

Although that moment was years ago and David now has a steady job, he frequently thinks about it. “I like to practice simple acts of love. I always carry gift cards for local restaurants with me. When you’re down on your luck, just getting a cold drink on a hot day is a luxury you can’t afford.”

God, when I see others struggling, let me be a source of light and love. Give me the courage to reach out. In Jesus’ name, Amen. 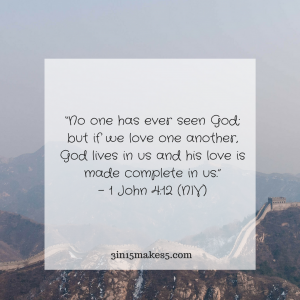