“Be kind and compassionate to one another, forgiving each other, just as in Christ God forgave you.” – Ephesians 4:32, NIV

Mason’s parents divorced when he was young due to his father’s alcoholism. His mother remarried a man who was cruel to both her and Mason. When he eventually died, Mason felt relief knowing his mother wouldn’t have to suffer anymore.

But Mason carried a lot of anger. Most of his anger was directed toward his father. “I kept thinking if he’d been a better man, a better husband that my life would be different. I’d be a better person.”

When Mason joined a campus ministry at college, he experienced the love of His Heavenly Father. “I struggled for a long time with the concept of God as my father, but as time went on, I realized I could trust God.”

As his heart began to soften, Mason thought about his father. He wanted to reach out to the man. But what would happen? He didn’t even know where his father lived anymore.

Thanks to the internet and a good friend, Mason was able to track down his father. They spoke briefly on the phone before agreeing to meet in person.

“I walked into that restaurant, and I saw my dad. I can’t explain it, but I was overcome with compassion for him. I had always thought about how much he’d hurt me. I’d never considered that he might have been hurting, too.”

It’s been a few years since their meeting, and Mason calls his dad on the phone regularly. “I share photos of my kids with him. He’s met my wife. Things aren’t perfect, but I want him to know that I forgive him.”

God, help me to forgive those who have wounded me. Let me see them through Your eyes of compassion. May there be healing on both sides. In Jesus’ name, Amen. 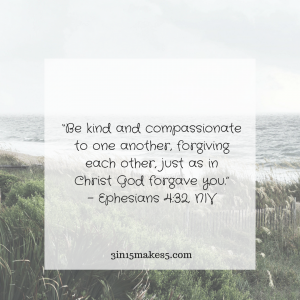