Chris was a wealthy man who owned a lot of real estate. He was a shrewd business owner, but he was also known to be a generous giver in his community.

On one cold January morning, Chris met with his financial manager. They talked for a while, then began to review his accounts. Chris quickly discovered that there was one account where he was owed a huge sum of money.

“Why haven’t you collected this amount yet?” Chris asked the advisor.

His manager pointed to a note in the file. “When I called this man, he told me his young daughter had just been diagnosed with a severe muscle disease. I know you’ve always been kind to those less fortunate, so I told him you’d review the account in a few months and you’d make a decision then.”

So, Chris had his financial manager arrange a meeting time for later that week. When Chris met the man, he brought up the account.

The man began crying. He begged for more time. “Two weeks after my daughter’s diagnosis, I lost my job. My wife and I took our savings and used it to fund a few months of her treatment.”

Chris forgave the debt and agreed to allow the man and his family to live in the property for an additional six months rent-free.

But a few weeks later, Chris heard the man was suing another person in small claims court over a few dollars.

“How could you do this?” He asked his tenant, “Shouldn’t you have had mercy when you’ve been granted so much?”

God, help me when I’m tempted to deny mercy. Let me remember all of the times You’ve shown me grace and offer that same kindness to my fellow human beings. In Jesus’ name, Amen. 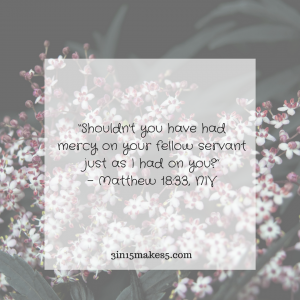