Then Peter came to Jesus and asked, “Lord, how many times shall I forgive my brother or sister who sins against me? Up to seven times?” – Matthew 18:21, NIV

Peter’s question might sound odd to readers, but in Peter’s time, a person was expected to forgive an offender three times. Thinking that he’s being generous, Peter asks if forgiving someone seven times is the limit.

But Jesus responds that He wants His followers to forgive seventy times seven (some versions say seventy-seven times). That would amount to roughly 490 times. You see, Jesus’ point wasn’t how many times Peter wanted to forgive.

Do you ever hold someone’s sin against them? Maybe your spouse said unkind things and asked your forgiveness. But as soon as the next argument starts, you bring up those remarks like they just happened.

Perhaps your relative never paid you back the money they owe you. Now, every family reunion makes you tense because all you can think about is how much you really want to collect on that debt.

Letting go of past hurts isn’t easy. But God longs for His children to forgive one another the same way He did—quickly and graciously.

Lord, I know grace with limits really isn’t grace. Help me to let go of this unforgiveness in my heart and be gracious to those around me. In Jesus’ name, Amen. 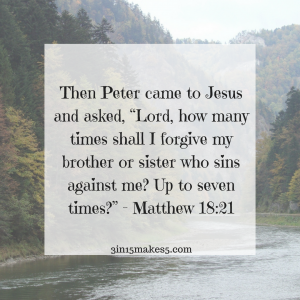