Zoey scanned the crowd that had gathered before her track competition. She’d hoped to see her parents, but neither had made an appearance. Despite the fact that both parents worked close by, they never took time off to see her perform.

For years, the hurt never bothered Zoey. She watched her friend’s parents attend all of her competitions and events. But still, she shrugged away the pain.

It wasn’t until Zoey had kids of her own that she realized how often her parents had been absent. “They weren’t bad people,” Zoey explains, “just emotionally distant.”

As she was processing the hurt, Zoey read the story of Hagar. “I could relate—feeling rejected and alone. But then God met her, and everything changed because He saw her. It comforted me to realize in the face of my parents’ rejection, God had seen me. He never missed one of my track events!”

Sometimes, the people we love overlook us. Maybe your father left your family and wasn’t around to attend your games. Perhaps your dad was emotionally distant and never a part of your life.

Even if your earthly dad has overlooked you, rest assured that your Heavenly Father loves you dearly! He’s never missed a moment of your life. He’ll always show up to support you.

God, thank You for being there for me. When I feel rejected by others, show me again that You see me and You know my whole story. In Jesus’ name, Amen. 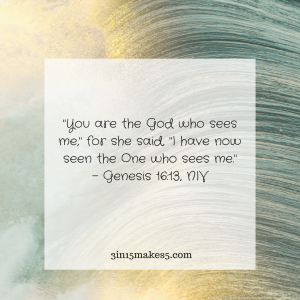