Bobby was a high school sophomore when he learned that his best friend had been killed in a drive-by shooting. When he met up with his circle of friends, he felt overwhelmed by the tension and anger in the air.

The only thing anyone wanted to do was get back at the gang. As ideas for revenge swirled, Bobby wondered what to do. A part of him wanted to join in and get even with the people that had done this.

He thought about his friend’s family and how there would always be an empty space at their table. His best friend would never get to attend prom or go to his dream college. He’d never help out his father in the family business or get married to his high school sweetheart.

“What do you think we should do, Bobby?” One of the troublemakers in the group asked.

Fortunately, the group listened to Bobby’s words and didn’t counter-attack the gang. A few weeks later, the police arrested several gang members, and they each went to prison for their crimes.

Lord, sometimes I’m tempted to act on my emotions. Help me to slow down and seek You first. I want to walk in peace, even when it’s hard. In Jesus’ name, Amen. 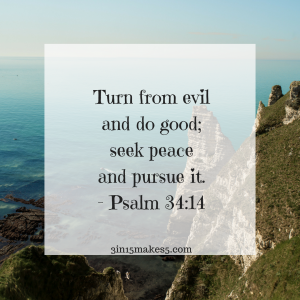