I was recently sent the Science, Invention, and Mathematicians Timeline to review. This is part of the new Á La Carte Projects offered by Home School in the Woods. Homeschool in the Woods Publishing provides hands-on activities for homeschoolers. Their products include timelines, lap books, maps, newspapers, and games. Until recently, they only offered bundled activities. But now they have started to sell projects Á La Carte, instead of having to buy a complete set.

The Science, Invention, and Mathematicians Timeline is one of these projects. It includes 120 different people, inventions, and events that have impacted history. The recommended grade level is 3rd through 8th.

The timeline was a printable product that was very easy to download as a pdf. Upon opening the document, there was a set of instructions that also gave tips on how to put together the timeline. Then there were 12 timeline pages, six pages of figures, and then a 12-page key that shows where to place each of the figures. 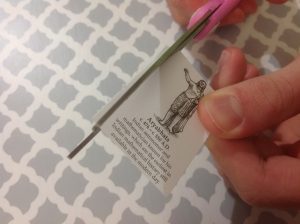 A few of the people included: 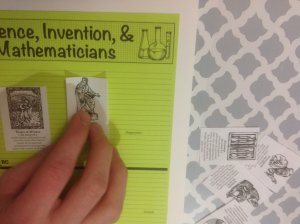 The above list barely scratches the surface. This is a well-thought-out set that spans from earlier than 1000 BC to 2015 AD.

I liked that the timeline was in pdf. The boys liked that they were able to pick the color for the timeline itself. This was a set that included many scientists that we had never heard of. Each of the timeline pages had the people, inventions, and events already typed in the appropriate areas, so all we had to do was glue and stick.

Even though the recommended grade level was 3rd through 8th, my boys (high schoolers) enjoyed reading the different facts. Their favorite was about the graham cracker. It was originally invented as a breakfast cereal promoting temperance and vegetarianism.

I like the Á La Carte option. It makes it less intimidating for those that may not be artistically inclined.

There wasn’t enough room in certain areas for all of the figures. If we didn’t cut them close to the lettering, then some of the figures touched. Also, some of the figures were so small, that they would have been hard to color. So we opted not to color them. There were a few typographical errors, but it didn’t change the meaning of anything.

Although the timeline was not in my boys’ age group, they still learned from it. I think this would be a great addition to a homeschool science class. It could be used over multiple years to fill in as you learned about each person. There is a nice variety of scientists, inventions, and mathematicians.

Homeschool in the Woods offers 51 different Á La Carte projects. A few of these include “The Industrial Times Newspaper & Grocery Sales Flyer,” “Composers through History Timeline,” “Literary Genres Lap Book Mini-Study,” and “Art Gallery File Folder Game.” Be sure to check their website to view the complete list.