When Amy learned she was pregnant with her first child; she was overjoyed. Although she hadn’t been trying to get pregnant, she always knew she wanted to be a mother…even if the timing was earlier than she’d planned.

Amy’s pregnancy was uneventful, and she took her beautiful baby daughter home. Everything was going well until Amy’s mother noticed something strange when the baby was a month old. She said her grandchild’s eyes appeared yellow in the light.

Listening to her mother’s instincts, Amy took her baby to the local children’s hospital. The doctor quickly diagnosed Amy’s daughter with liver failure. She would need a transplant and soon.

Fortunately, Amy’s mom was in good health. Since she was a match for the baby’s blood type, the doctor had decided to take a portion of healthy liver and give it to the baby.

The night before the surgery, Amy couldn’t sleep. Her baby seemed restless, so Amy paced the tiny neonatal unit. She went up and down the halls. Finally, about three a.m. a wave of peace came over Amy. The baby quieted, and the two fell asleep.

When Amy woke the next morning, she saw a text message on her phone. At three in the morning, her friend had been woken up to pray. She’d contacted other friends, and they’d begun praying together over the phone, specifically asking for peace and rest.

After the surgery, Amy’s daughter recovered and so did her mother. The liver transplant was a success, and both are on their way to a healthy future.

God, I ask for peace and rest for friends who are struggling today. Grant them the comfort of Your presence and let them feel the love being sent their way. In Jesus’ name, Amen. 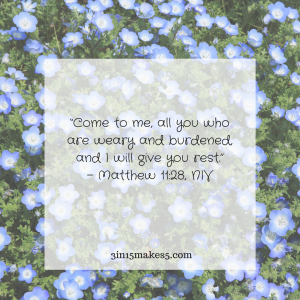