When they had finished eating, Jesus said to Simon Peter, “Simon son of John,
do you love me more than these?” – John 21:15, NIV

Peter couldn’t help the tears that poured down his face. He sat on the front stoop rocking, his whole body unable to bear the weight of what he’d just done.

He couldn’t forget his promise just days ago. “Even if the world betrays you, I won’t.”

He’d meant to keep those words. Then he’d let his fear get the better of him. But it was the look in Jesus’ eyes when he’d uttered the last denial that he couldn’t get out of his mind.

His heart ached in a way that was almost physically painful. He’d failed the one person who meant the most to him.

Days later, the news came. Jesus was alive! Peter rejoiced, but the heaviness of what he’d done was still with him. He dragged his betrayal around like a heavy sack of stones.

After breakfast, Jesus asked a question quietly. His words were so quiet that Peter almost missed them. “Do you love me?”

“You know I do,” Peter said with conviction.

Then Jesus asked the question twice more. In all, he asked three times, and he did it to prove a point.

He was intentional about drawing Peter’s attention away from his failure and back to their relationship.

Jesus doesn’t want you to get bogged down by what you’ve done. He wants you to get back on track, and that starts with accepting His forgiveness and living out His calling for your life.

God, sometimes I fall short. I sin. I betray. I mess up, just like Peter. When that happens, help me to repent, then turn my focus back to You. In Jesus’ name, Amen. 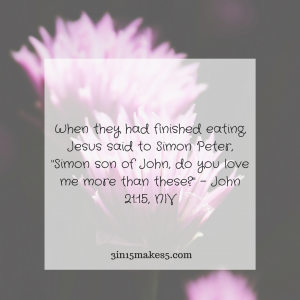