When Ron was working as an intern, his boss invited him to join him during their annual company party. Ron had been looking for a way to increase his network anyway, so he decided to attend.

At the party, Frank had a woman on his arm that he introduced as his wife. The woman was beautiful, but Frank spent the entire night making little digs at her. He said unkind things about her weight, her housekeeping skills, and even brought up their children.

“He tried to act like he was joking but he didn’t realize he was the only laughing that night,” Ron says. “After that, I made myself a promise. If I was ever lucky enough to have a wife and kids, I’d never publicly shame them.”

Years later, it’s a pact that Ron has kept. In fact, he regularly brags to others about his wife and children. “I’m always telling people about how amazing my wife is. I want her to know she’s precious to me.”

Publicly praising your loved ones when you’re with others is a great way to brighten their day. Don’t be afraid to compliment them, sharing what you love about them or the amazing things they do.

For example, you can say something simple like, “She’s so smart that she taught herself how to knit using YouTube videos.” Or you can praise a loved one’s abilities like this: “He’s got an engineer’s mind. He can build a bookshelf without even glancing at the instructions.”

God, help me to look for opportunities to commend my loved ones publicly. Like Ron, I want my family to know how precious they are to You and me. In Jesus’ name, Amen. 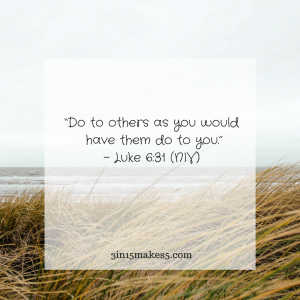