I was recently sent a copy of Wulf the Saxon, an audio theater production, to review. This is an adaptation of a G.A. Henty novel brought to life by Heirloom Audio Productions. The 2-disc audio CD set arrived in a well-insulated envelope. Upon opening, I was immediately drawn to the cover with the beautiful ocean scene in the background. It is about 2.5 hours in length.

When we first began listening, I was a little confused. It started with two kids on a ship meeting a man named George (G.A. Henty). George tells the kids about a story he is writing. And he mentions the Bayeux Tapestry, which shows the events leading up to the Battle of Hastings. The boys and George were not part of the book, but it helped set the scene.

Then you are brought into the story of Wulf, a young Saxon thane, a ward in the household of Harold Godwinson. Wulf gets into trouble early and is sent back to his estate, Steyning, for a year. During that time he learns how to fight and spends time reading books.

Once he returns, with his servant Osgod, he has grown up and is put into the service of Harold. He’s sent on many different adventures. He meets another thane, Beorn, who becomes a good friend and companion. They go on a sea voyage with Harold but are shipwrecked at Normandy, and all are captured. Wulf and Beorn are able to escape and get help for the release of Harold and the rest of the men.

Things get dicey when King Edward (the Confessor) dies. Harold is named king, but William, the Norman, believes he is the rightful heir. There is a lot of fighting leading up to the Battle of Hastings. If you know your history, you know what happens next. If not, this audio adventure will definitely bring the story to life and tell you the outcome. You will feel like you are there on the battlefield.

A few of the cast members include:

I thought the sound quality was really good, and the sound effects were great. My teenage boys really enjoyed listening to this production. They read the Henty book beforehand and said that this tale was very close to the story. They thought the voice actors were enthusiastic and cheery and that the production was acted out well. But they thought the French accents seemed a little odd, and it was hard to understand them, especially at the beginning. Some of the scenes were quiet and hard to hear, but then others were very loud. They really liked the narrator (Brian Blessed who has done many voice productions). He helped you actually be able to picture what was happening in the story.

It was really interesting to hear the tale of William the Conqueror from the other side. Not many stories tell about the Saxons and what was going on in England at the time. This telling helped to picture things from the English perspective.

We would highly recommend the Wulf the Saxon audio CDs to everyone. It is a great telling of the story and brings history to life.

And this is just one of the many adventures from Heirloom Audio Productions. They have adapted other G.A. Henty novels into audio productions. 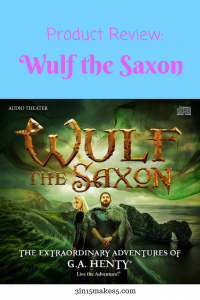