“When Priscilla and Aquila heard him, they invited him to their home and explained to him the way of God more adequately.” – Acts 18:26, NIV

Aquila and Priscilla were a husband and wife team who believed in Jesus. They were tentmakers by profession and good friends with the apostle Paul. They had followed him to Ephesus, where they heard of Apollos.

According to the Bible, Apollos was well-educated, and he knew the Scriptures. He was always a passionate speaker in the local synagogue. But some of Apollos’ theology wasn’t correct.

When Aquila and Priscilla saw that Apollos did not fully understand the Gospel story, they welcomed him close. They invited him into their home, and they explained the Scriptures so his message would be accurate and true.

The result of this discipleship is that Apollos would eventually go on to have a tremendous impact in Achaia.

“When he arrived, he was a great help to those who by grace had believed. For he vigorously refuted his Jewish opponents in public debate, proving from the Scriptures that Jesus was the Messiah.” (Acts 18:27-28)

When you see a Christian who does not fully understand God’s Word, it is important that you humbly correct them. By doing so, you may be preparing the next Apollos.

God, give me eyes to see those who need someone to disciple them. Let my words be kind and encouraging toward them. Show me how to be a Godly mentor. In Jesus’ name, Amen. 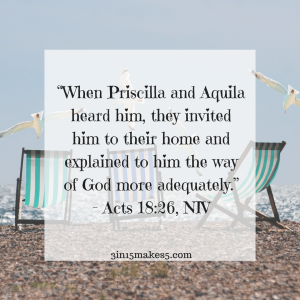