We are currently taking the second year of Latin, so I was intrigued by the description of the Picta Dicta Vocabulary Builder, an online course from Roman Roads Media. I was grateful to have the chance to review this product with my three high school boys (10th and 11th grades). 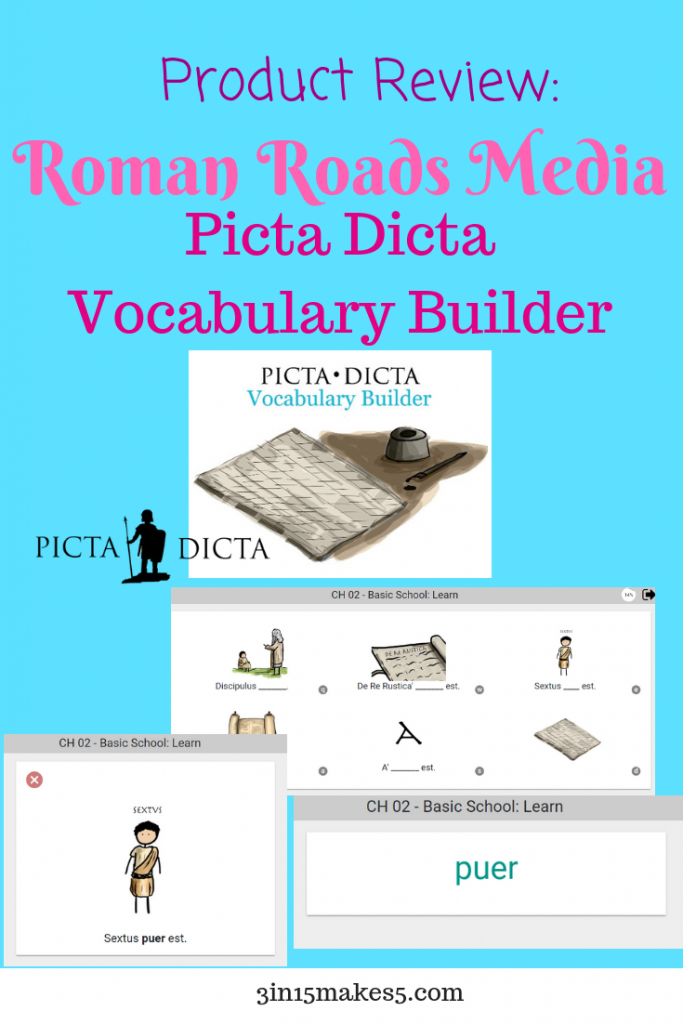 The program comes with 14-month access for one student, but you can add more students for a fraction of the price. The teacher/parent sets up the account and then can add students (learners) to the account. Each student is assigned a username and password to access the course either via computer, iOS, or Android. (The website mentions the program will work on all browsers except Internet Explorer.)

The teacher is then able to access the progress of each learner to see how much time was spent that week and the performance (percent correct). 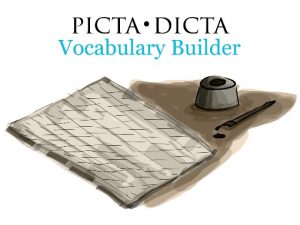 There are a total of 31 chapters, each covering a different topic:

Each chapter includes at least 20 vocabulary words to learn. With the time we had, we have gone through the first five chapters. I can only guess that the other chapters have a similar number of words.

There are a total of 212 campaigns throughout the 31 chapters. If your school requires 180 days, you would need to go through more than one campaign a day to complete the entire course in one school year. (Remember, you will have access for 14 months.)

Here is a screenshot showing some of the campaigns with the scores (1-5 stars). 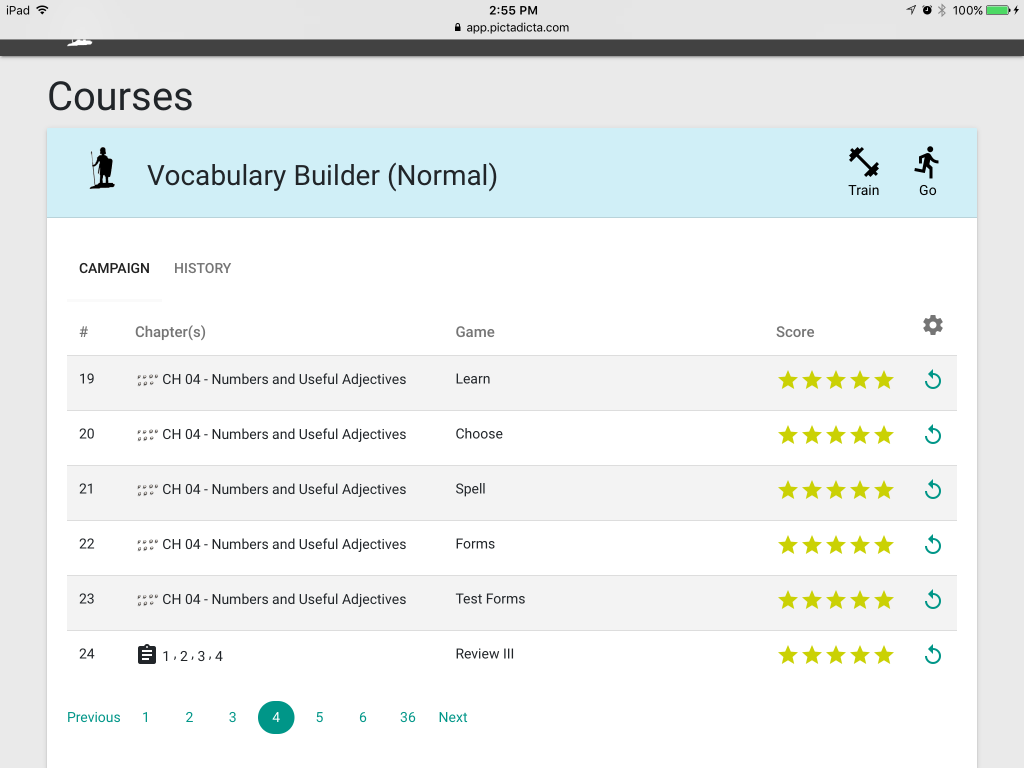 You have two options for “playing” the games. You can pick “Train” or “Go” (as you can see in the above picture). Train will allow you to pick quickly the chapter and campaign you would like to work on, which is helpful if you don’t want to work on the chapters in order. By choosing “Go,” the program will take you to the campaign after the last completed. We chose to complete the chapters in order.

In this section, you are provided with pictures and definitions. Most will also include an audio pronunciation. Often the word will be used in a sentence to help with context.

If you want the word repeated, there is a little speaker option you can press/click. After about five pictures, you are quizzed to pick the correct picture that corresponds with the word. Then you learn a few more words, have another quiz, and so on.

One of my boys pointed out that the pictures also have a little letter beside each one. You can press that letter on the keyboard instead of having to use the mouse to click the picture.

For this lesson, you need to choose the correct meaning of the word. Once again you are given six pictures to choose from. If you chose the wrong answer, the program will quiz you on that word again after asking a few other words.

This section quizzes you on the forms of the words that were learned in the Forms section. Not all chapters included a forms test, and some only had a few questions (Chapter 4 only had four questions).

After all chapters except Chapter 1, you had a chance to review words from all previous chapters. In this review, you see a picture and then have to type in the correct Latin word. Not all of the vocabulary words are included in the review, just a sample from each chapter. 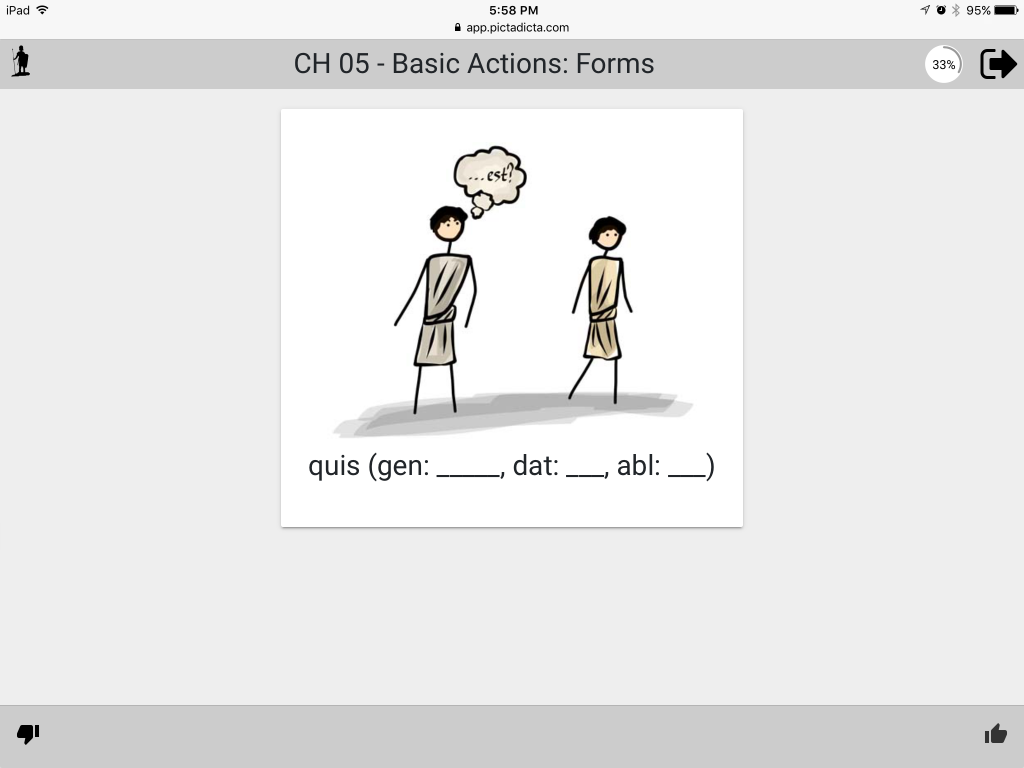 It’s definitely a good idea to have a basic understanding of some Latin before diving in. The description online mentions that this course would be good as a complement to a Latin class, but that it could also be a stand-alone course. I would lean more towards it being a complement to another course.

We also decided after Chapter 1 that it would be a good idea to write down the vocabulary words with their definitions and forms (if provided). The website mentioned a downloadable workbook with puzzles, drills, and exercises, but I didn’t find a copy of this. It may only be available for the other Picta Dicta courses and not the Vocabulary Building course.

Here is an example showing three different screens from one of the lessons. The first shows the word puer (meaning boy). The second shows six choices. The correct choice would have been “e” (Sextus puer est). And the last picture shows what happens if you get the wrong answer. 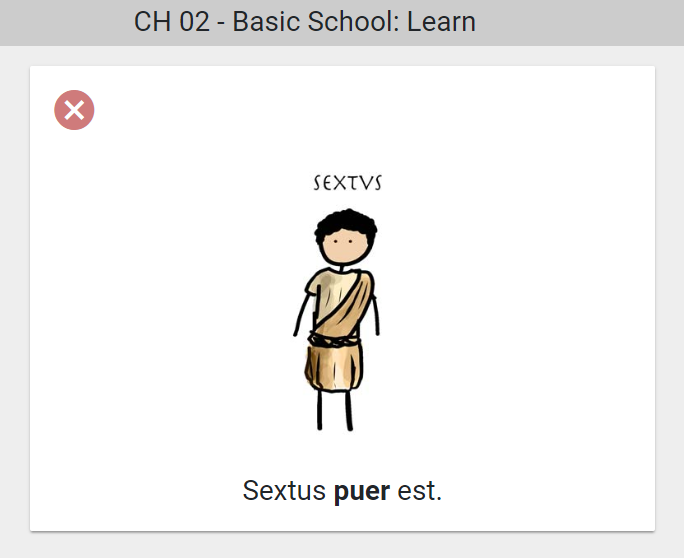 A Little Confusion with Forms

There was a little bit of a learning curve when it came to typing forms. Sometimes it would ask for the second form and then wanted to know if it was masculine, feminine, or neuter (abbreviated m., f., or n.). I would, for example, type in “m.” but it would be counted wrong. I wasn’t supposed to type the period.

There were also times that they would include part of the declension of a word and you were supposed to fill in the blanks (see pictures below). They wanted you to type part of the word instead of the whole word. Other times the entire word needed to be filled in. It was a little confusing at first, but then we got the hang of it.

I was also a little confused about the word quae. In Chapter 1, it was used to mean what things (plural)? The forms were quae (gen: quorum, dat: quibus, abl: quibus). But then in Chapter 5, the same word was used to mean who is she (singular)? The forms were quae (gen: cuius, dat: cui, abl: qua). Not knowing enough Latin, I’m not sure if this is an error, or if this is a type of word that can be used in more than one way.

As I’ve done in previous reviews, I’ve added verbatim the boys’ thoughts. You’ll find those as bulleted points below.

Overall, I think this is a good course for learning Latin vocabulary. Having the words spoken as well as seeing them on the screen is helpful. The pictures help to recall the vocabulary word.

The course covers many different topics. This is helpful for your student to see how some form of Latin is used in many of the words we speak and write.

There were a few instances where the forms were not provided for a word, so it was a surprise when it showed up on the quiz. For example, in Chapter 1, we were given the word quid, meaning what thing (singular)? Once you got to the forms section, it asked for the genitive, dative, and ablative. These were not included in the lesson (but are cuius, cui, and quo, respectively). This was probably the most frustrating thing when it came to taking a quiz.

In Chapter 2, there is a picture that might be a little controversial. It shows a teacher hitting a student with a stick for the verb verberat (to beat, flog, whip, spank).

I think the Picta Dicta Vocabulary Builder course would be helpful for anyone wanting to learn Latin vocabulary. There are many words that are provided, and having the different platforms will make it easy to use (as long as you have an Internet connection).

As mentioned before, I think it would be a good idea to write down the vocabulary words (possibly in a spiral notebook to keep everything together). That will make it easier to go back to review words before the review lessons that cover all the chapters.

If you have any students in junior high, high school, or college, you may want to consider this course. Roman Roads Media also offers other Latin courses geared towards younger children.