Then their eyes were opened and they recognized him, and he disappeared from their sight. – Luke 24:31, NIV

Chris was twenty when his best friend was killed in a mugging gone wrong. He was devastated. He’d grown up with his friend and considered him the brother he’d never had.

For a long time, Chris walked around in a haze. He couldn’t understand how his friend could die so young. The two boys had often talked about all of the adventures they’d have together after college. They planned to go river-rafting, attend the Olympics, and run a charity race.

Chris kept searching for answers, troubled when all he could come up with were more questions. What if he’d been there that night to protect his friend? What if his friend had taken a different path home instead?

It wasn’t until Chris was reading Luke 24 that he found comfort. The disciples had been grieving for their friend, too. They even spoke with Jesus without recognizing him.

As Chris continued reading, he realized that Jesus had overcome death and he would see his friend again. Chris explains, “I doubt I’ll ever understand why, but I know that death doesn’t have the final word. My friend is at peace because Jesus overcame the power of the grave.”

Lord, when I grieve, help me to remember this is not the end. You are powerful over all things, including the grave. Thank You for sending Jesus so I could know hope. In Jesus’ name, Amen. 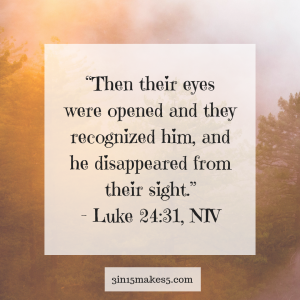